From caring to cooking ― helping people to be independent 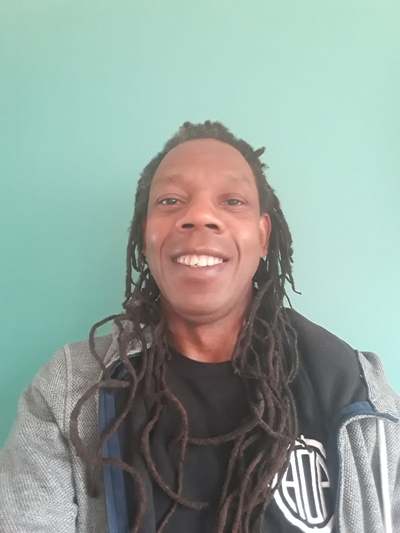 Meet Harris Beaumont. He’s got one of the most diverse careers yet for a hero or indeed anyone for that matter. He started as domestic help in a residential home run by Walsall Council and was quickly promoted to a caring role.

Meanwhile in his private life, he had just retired from competitive karate―fighting for England no less―and became a karate instructor which he undertook as a second job. As well as being a single parent to twin boys, in his spare time Harris made hats, “You know the ones that go over dreadlocks―I’m an Afro Caribbean man with dreadlocks and I can knit those colourful hats.” Harris did and still does love to bake cakes. Harris went on to own a bistro / bar in later life which fuelled his love for cooking and baking. We will return to the baking and the cakes later!

Harris won Youth Worker of the Year for Walsall

Following his role as a carer, Harris obtained other employment including a driver for a day centre for the elderly. Harris later went on to become a youth worker. During this role, Harris worked in a local school as part of a pilot scheme, working alongside police, school staff and sexual health workers. Harris undertook relevant training including sexual health, drugs and alcohol misuse, abuse and signposting. He was obviously a good role model as his own sons grew up and also became youth workers, working alongside their dad at one point. Harris was clearly very good at it―winning Youth Worker of the Year for Walsall. One of his jobs was a condom distributer at a school that had a high teenage pregnancy rate.

From youth work to supporting people with learning disabilities

Following his time spent as a youth worker, Harris gained a full time position as a reablement officer with Walsall Council supporting adults with learning disabilities. During this role, Harris supported individuals to engage in meaningful activities in the community such as swimming and bowling. He was also able to share his love of the kitchen, teaching people how to bake and cook where they would enjoy making items to take home. During this period Harris completed different training courses such as communication training including Makaton―a language programme that uses signs and symbols, medication training, first aid, and health and safety and risk assessing.

More recently, Harris has been employed as an enablement and independence officer with the council, supporting individuals to maintain and increase their independence. This can include support with travel training, money management, shopping, cooking, food hygiene, living at home safely and community inclusion. What Harris does―and clearly loves to do―is help people become independent; to do the things most of us take for granted, getting on a bus, crossing the road safely, getting things from the shop.

He worked with one man with mild learning disabilities with travel training, helping him to get to his job in a charity shop. This was intensive, ensuring he gained the skills and enough independence to make the journey on his own as it involved catching two buses. Prior to completing the travel training this particular gentleman had always attended a traditional day centre, but now―after working with Harris and seeing what was possible for him―he has chosen instead to focus on his work at the charity shop.

Harris has been sharing his love of cooking and baking

When the centre where Harris is based closed during lockdown, Harris was deployed to provide support at Holly Bank House which became a centre for stroke patients temporarily transferred to make way for COVID-19 patients.

As his Hero nomination says, “For the past nine weeks, Harris has been working in the kitchen at Holly Bank, supporting their needs around catering and preparing and serving food to patients. They constantly comment on his attention to detail and his positive nature, sociable and enjoyable company at a time of worry and uncertainty.”

He just wanted a chat with me even though it was 11.30pm

Even in this new role, Harris has still keeping in touch with some of his other clients during the lockdown period ensuring they are OK. He took a call at 11.30 one evening from a young man who, “just wanted a chat with me, he’s all on his own during the lockdown now that his college has closed. He’s never lived on his own before, he’s always been in the care sector, so I’m happy to talk to him and support him.”

Asked what Harris does to relax, Harris enjoys boxing and going for walks and it’s not a surprise that he makes more cakes and cooks― often for his mum who has always been there for him and the twins, as well as others. During lockdown Harris has also made cakes for his colleagues, helping to keep everyone’s spirits up. Indeed Harris has never had a problem finding flour during lockdown as colleagues have.